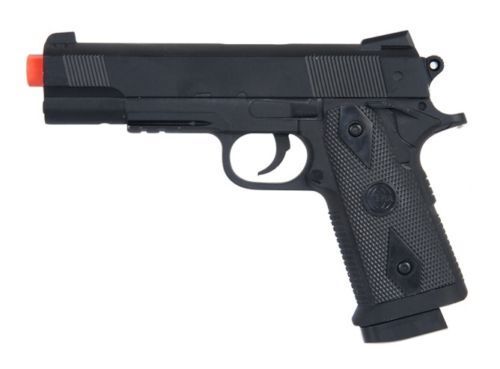 Airsoft guns are firearms that shoot soft plastic pellets instead of bullets. These guns are commonly used in the game of airsoft, where you tag players on the opposite team by hitting them with these pellets. CYMA weapons can be used in a variety of settings, from shooting targets in the backyard to organized competitions and role-playing simulations.

How are CYMAs airsoft guns powered?

How is the power of airsoft guns measured?

Airsoft weapons measure the projectiles FPS, which stands for feet per second. This indicates the speed at which airsoft pellets leave the barrel of the gun. CYMA products can range from just 100 feet per second to more than 500 feet per second. Oftentimes, a faster speed rating will result in the airsoft pellet traveling further, but increased speed can also cause decreased accuracy, so be sure that you purchase a high-quality model if you require a faster pellet speed.

What styles of airsoft gun can you find?

Content provided for informational purposes only. eBay is not affiliated with or endorsed by CYMA.