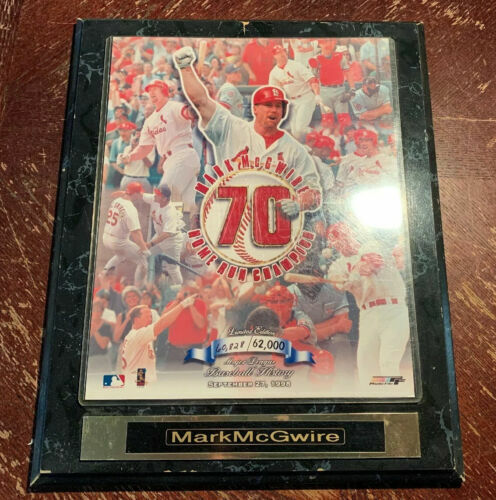 If you watch Major League Baseball, you probably have a team or specific players that you cheer for. Periodically, some of baseballs top players achieve noteworthy records. You can remember those feats by collecting commemorative memorabilia that represents the achievements of a player or team. One of those achievements was produced by Mark McGwire, who hit a record 62 home runs in a single season in 1998. Mark McGuire vintage sports plates are available to collect and remember this piece of history.

Who is Mark McGwire?

Mark "Big Mac" McGwire is a retired baseball player who is known for his time with the Oakland Athletics and St. Louis Cardinals. McGwire is considered one of the all-time greats by most baseball journalists, critics, players, and fans alike. He is one of the biggest major league stars to never play for the New York Yankees. He finished his career with 583 home runs, which is the fifth highest of all time. In 2010, nine years after retirement, he became a batting coach for the St. Louis Cardinals.

What event do the plates commemorate?

September 8th, 1998 is a day that will forever be etched in baseball history. On this day, Steve Trachsel of the Chicago Cubs threw a pitch that would define the sport that season and in the latter half of the decade. McGwire, with 61 home runs in a single season, responded with a powerful swing that propelled the baseball past every player and over the left field wall. That was number 62, breaking the single-season home run record. McGwire had won that seasons home run chase.

What are the features of these plates?

The McGwire commemorative plates are official merchandise from Major League Baseball, with 20,000 copies in existence. The image on the front displays McGwire hitting the last few home runs up to the inning where he broke the single-season record. Marks handwritten signature and the number 62 are written on the top of the plate. The plate was crafted in a kiln at the industry standard of 95 maximum days. It is a collectors piece for fans who appreciate McGwires accomplishment.

What shows that the plates are authentic?

The limited-edition collectors plates come with a document that certifies that it is an authentic piece of MLB memorabilia. This certificate of authenticity is hand-signed with its own unique plate number and a signature by the Director of the Board of Governors, James P. Gallagher. On the back of the plate, there is an inscription that states most of the same points made by the document, detailing the number of home runs hit. It is stamped with a Bradford Exchange logo and Bradex serial number.

Content provided for informational purposes only. eBay is not affiliated with or endorsed by Mark McGwire.