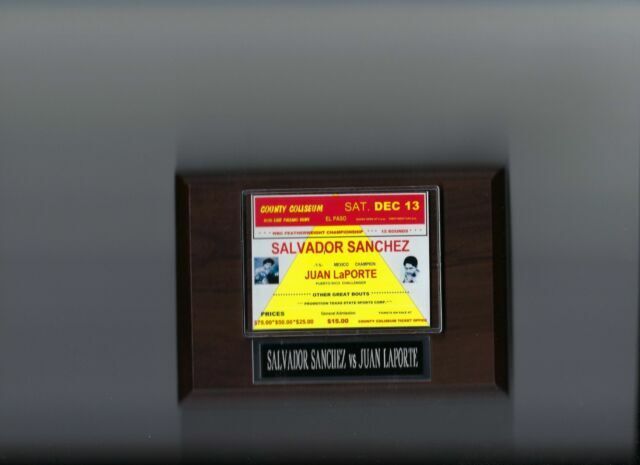 Salvador Sanchez Narvaez was a Mexican boxer who was born in 1959 in the town of Santiago Tianguistenco. He was the lineal featherweight and WBC featherweight champion from 1980 to 1982. Sanchez had 46 total fights, 32 of which were won by knockout and only one loss.

What can you expect from Salvador Sanchez photos?

Salvador Sanchez boxing photos highlight matches and key moments of his career. Some photos may feature Sanchez throwing a punch, and other shots will highlight him in the process of landing a hook or jab. Many of the photos include Sanchez in the corner of the ring with a trainer or out of the ring with some of his opponents during a press event. Some Salvador photographs include him posing for the media. In these shots, Sanchez is usually wearing his featherweight championship belt.

What photo and product options are there?

In addition to traditional photos, other print options for vintage boxing fans are available:

What photo size options are there?

Many Sanchez photographs are printed on 8 x 10 inch photo paper. If you get a photo bundle that includes many prints of this boxer, some of the products may have the same measurements. Photos of Salvador are also available in 4 x 6 inch prints; these products are suitable for postcards.

What color options are available?

Most Sanchez shots happened several decades ago, so many of the pictures are in black and white. However, new photo technologies became available during his life, so some of his photos are also printed in color. You may also be able to find retouched photos that were originally shot in black and white with color added later.

What are some of the boxing matches that are noteworthy?

Sanchezs first fight of note was against the Mexican bantamweight champion, Antonio Becerra. Some of his other big fights were against: